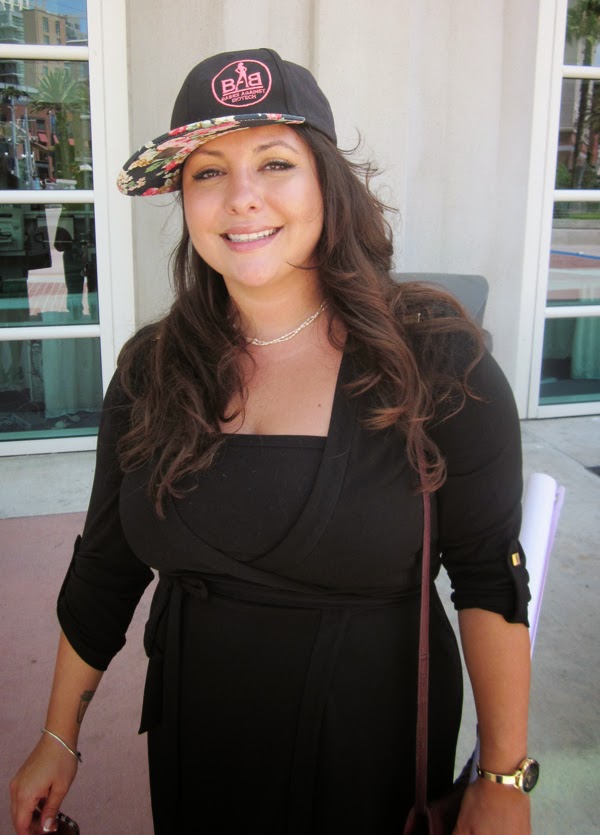 Nomi Carmona of “Babes Against Biotech” 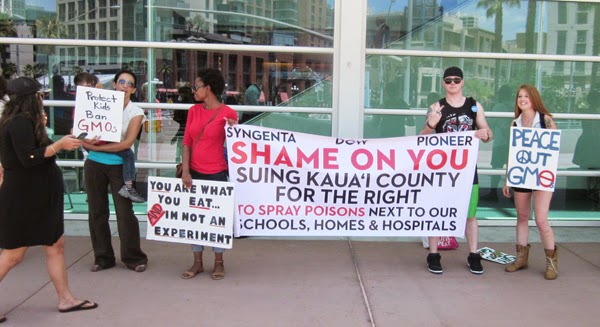 The banner protesting the Kaua’i lawsuit (Nomi at left) 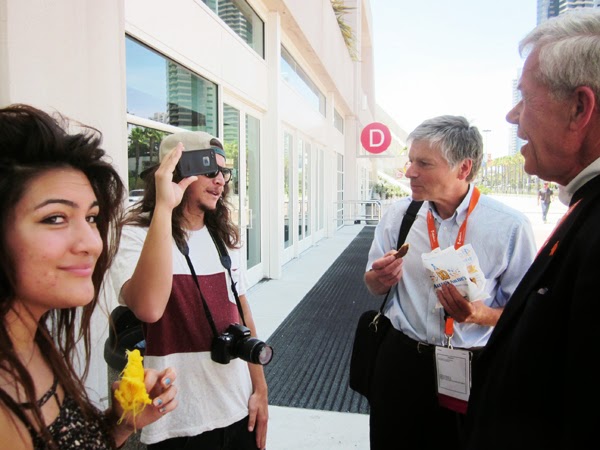 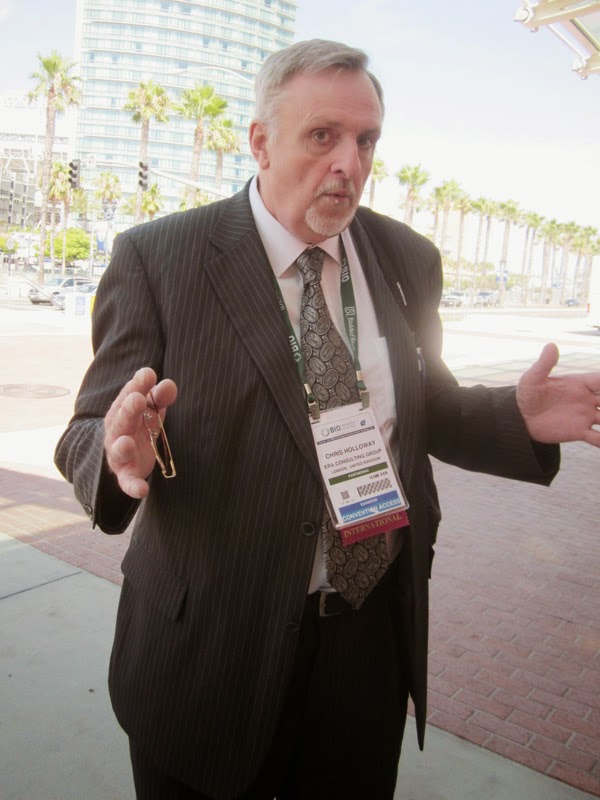 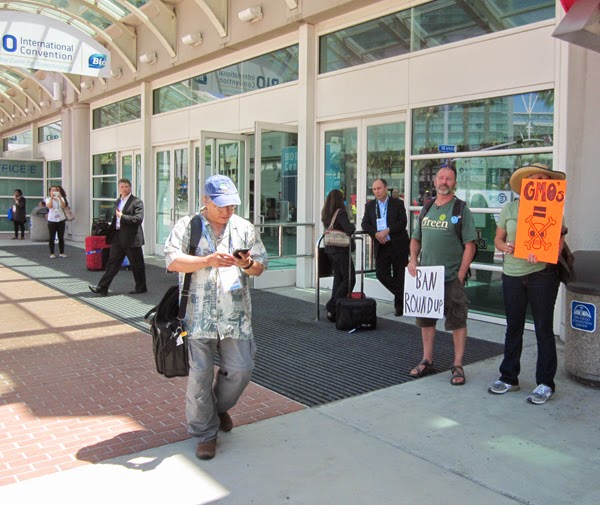 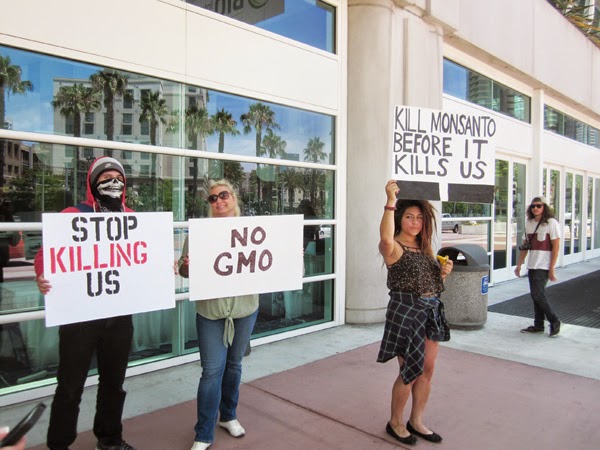 “Kill Monsanto Before It Kills Us” 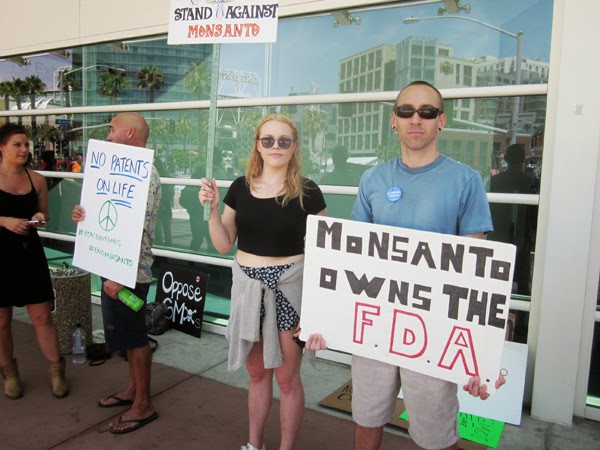 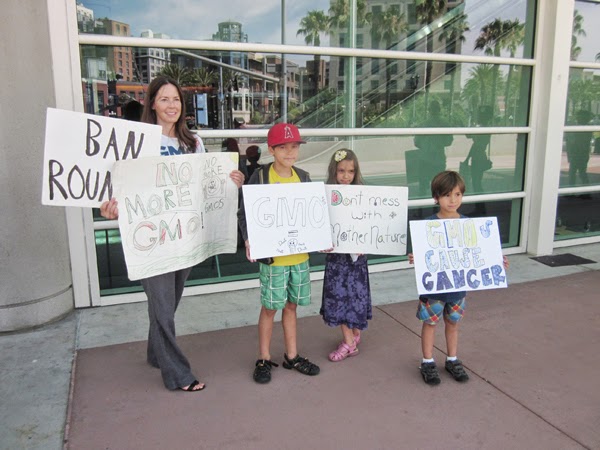 Mom and three kids came down from Temecula to protest

A Difference of 13 Years

The relative absence of organized protest to the 2014 BIO convention in San Diego — an event extensively ballyhooed in the local media because Hillary Rodham Clinton came to town to deliver the keynote speech — stood in stark contrast to what happened the first time BIO came to town. In the summer of 2001, opponents of biotechnology in general and GMO’s in particular organized an elaborate response, including hosting their own “Biojustice” convention two days before BIO’s opened and bringing in worldwide speakers, including Vandana Shiva from India and Canadian farmer Percy Schmeiser, whom Monsanto sued for patent infringement — and won — after their genetically modified canola seeds contaminated his crop. Opponents also tried to set up an elaborate series of street actions during the BIO convention itself.
Unfortunately, the San Diego police and business establishment were ready for them. Partly to ward off a riot similar to the one in Seattle in November-December 1999 at the World Trade Organization’s ministerial meetings, and partly to show the biotech industry that the city was on their side, the police mounted a massive presence, closing off much of downtown San Diego. Police also aggressively enforced traffic laws — including arresting people for stepping outside crosswalk lines when crossing streets — to lock up as many protesters as possible and discourage those left free.
The Centre City Development Corporation (CCDC), the now-defunct redevelopment agency for downtown San Diego, organized meetings of local property owners to make sure nobody rented temporary space to host anti-BIO demonstrations. As a result, the Biojustice organizers had to set up their “convergence center” miles away from the convention, in the parking lot of an alternative church in Golden Hill. The quasi-military tactics of the police put off not only Biojustice protesters but BIO delegates as well. Chris Holloway of the ERA Consulting Group in London attended both the 2001 and 2014 BIO conventions and was astounded that in 2001 he couldn’t get anywhere near the Convention Center without showing his delegate badge.
At least one activist who participated in Biojustice suggested that the heavy-handed police response to the 2001 anti-BIO protests discouraged local activists from mounting major challenges to later BIO conventions in San Diego. This may be why activists have paid so little attention to BIO in a city where the three Marches Against Monsanto in May and October 2013 and May 2014 have drawn large crowds. The last March Against Monsanto on May 24 drew over 3,000 people and featured a pre-march rally of local speakers urging anti-GMO activists to support community gardens, farmers’ markets and other alternative ways of obtaining freshly grown, organic and non-GMO food.
The relatively tiny size of the anti-BIO demonstration June 26 had one unforeseen result: protesters got to talk to BIO delegates one-on-one and found a number of them surprisingly sympathetic to their cause. Chris Holloway took exception to a sign that said “GMO’s = ” with a drawing of a skull and crossbones. But he told protesters he agreed with their opposition to GMO’s in agriculture. His concern was that medical researchers like himself be allowed to use genetic engineering to develop treatments for hereditary diseases. Holloway told protesters about the elaborate precautions medical GMO researchers take to ensure their GMO’s don’t contaminate the environment, including destroying all waste products excreted by their human research subjects — a far cry from the notoriously sloppy practices of agricultural GMO researchers.
In general, BIO delegates from other countries — including most of western Europe, where GMO’s are either banned outright or there are labeling requirements for foods containing them — were more sympathetic to the protesters’ cause than Americans. Hendrik Jan Houthoff, a delegate from LINXIS in Amsterdam, drew the same distinction as Holloway between medical and agricultural biotech research. “The way Monsanto does it doesn’t help mankind,” Houthoff said. He added that his daughter, who does biological agricultural work in France, is even more anti-Monsanto than he is.
Asked why his daughter doesn’t like Monsanto, Houthoff said, “Because they are using methods of agriculture that kill diversity in nature, that kill insects, and that don’t help farmers because they have to buy [seeds] from Monsanto every year.” Some of the demonstrators were astonished to hear a BIO convention delegate essentially repeating their talking points and attributing them to his own daughter.
Nomi Carmona did get into an argument with an African-American graduate student in biotech who conceded that “it is a legitimate concern when you’re talking about how people get food when it’s not grown in their area.” But the grad student basically took the industry’s point of view that GMO’s should be assumed to be safe and the burden of proof should be on those who want them banned to prove that they aren’t. “If you’re going to make an argument, there have to be a lot of facts with it,” she said.
“We can’t have the facts without the testing being done,” Carmona replied. “We’re not allowed to.”
The grad student, who had been in the auditorium when Hillary Clinton gave the keynote speech, asked Carmona, “If you remove GMO’s, what is the alternative to feeding the American population?”
It’s an argument that particularly incenses Carmona. “It’s a fantasy right now that GMO’s will help ‘feed the world,’” she told Zenger’s. “Spending $46 million[1] fighting labeling and disclosure of genetically engineered ingredients in your food in California is not ‘feeding the world.’ Denying and crucifying scientists like Tyrone Hayes for exposing the major health risks associated with Syngenta’s [pesticide] atrazine is not ‘feeding the world.’ Everything they’re doing, they’ve made a lot of promises and nothing’s come out. Where are the increased crop yields? They don’t exist.”
[1] — A Huffington Post article, http://www.huffingtonpost.com/2012/10/26/prop-37-opponents_n_2023719.html, published October 26, 2012, revealed that food and chemical companies had contributed nearly $30 million to defeat Proposition 37, which would have required labeling of foods containing GMO’s in California. This doesn’t count what was spent in the last week before the election, which could have brought the total closer to the $46 million Carmona claimed.
Posted by mgconlan at 8:02 PM