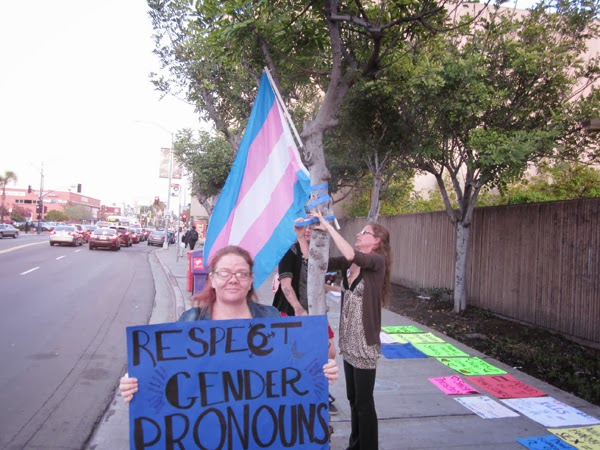 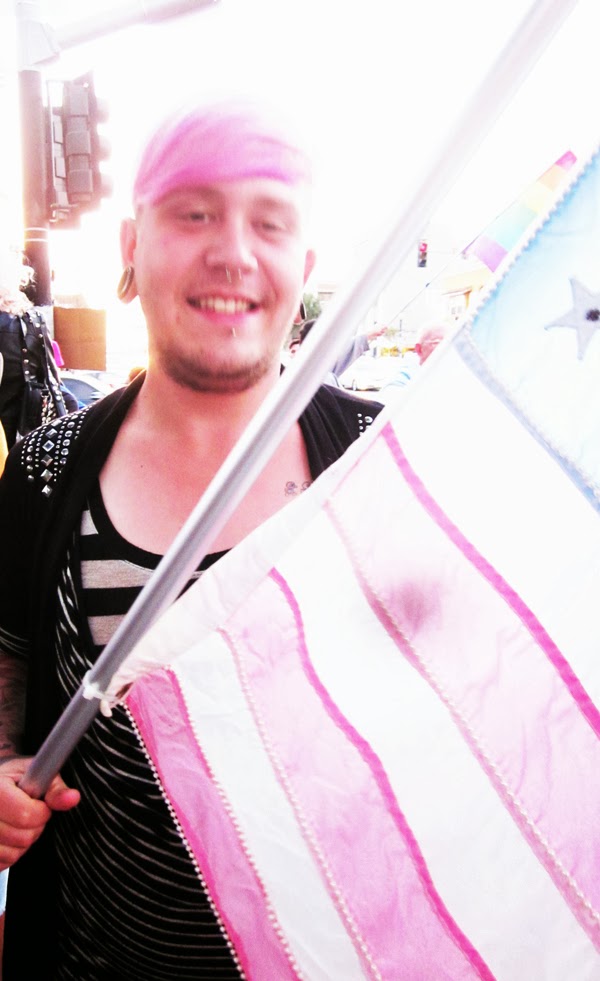 Jay and the Trans* Flag 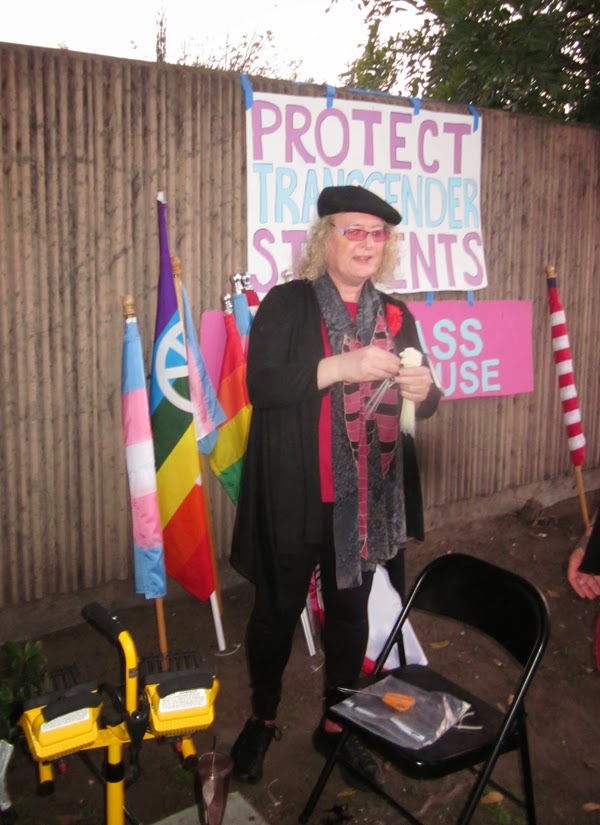 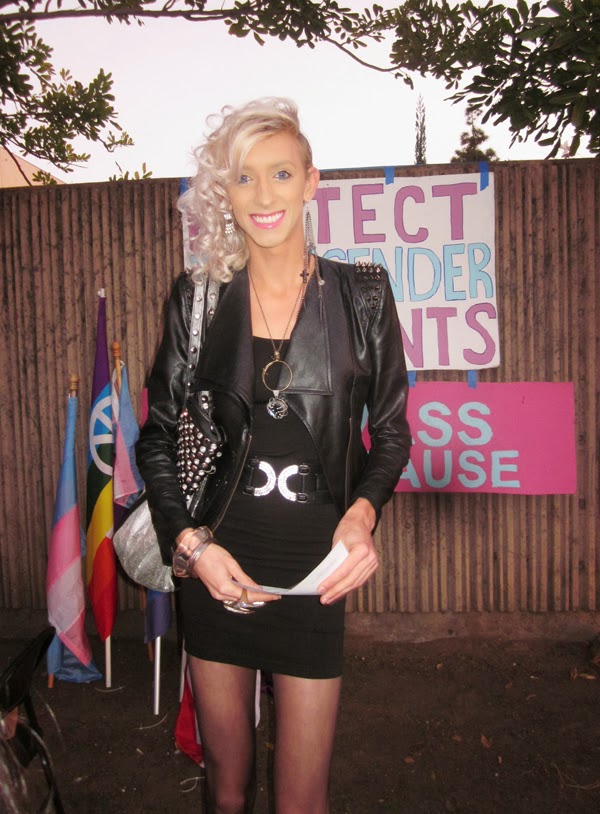 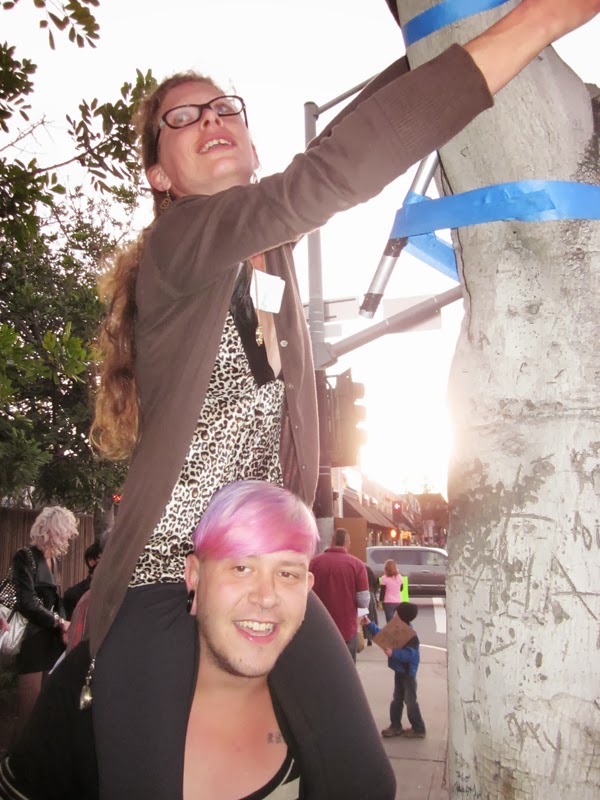 Putting Up the Trans* Flag 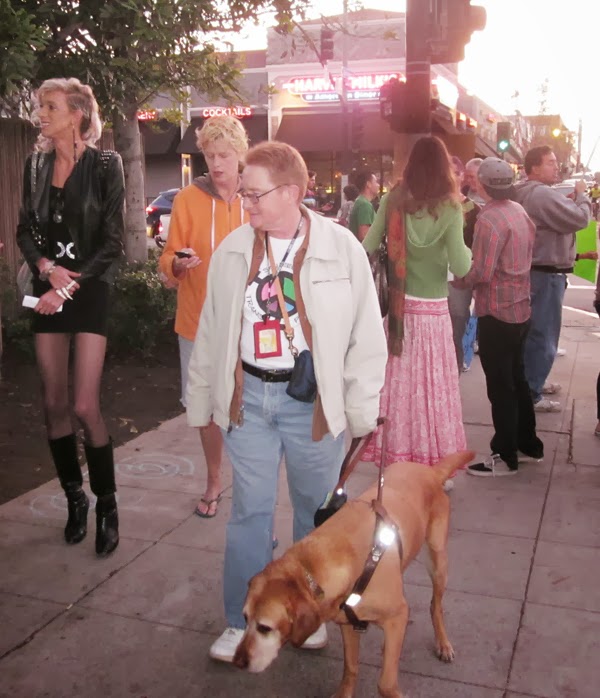 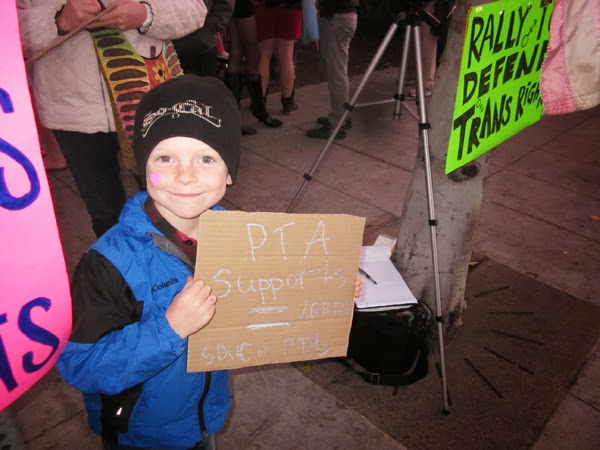 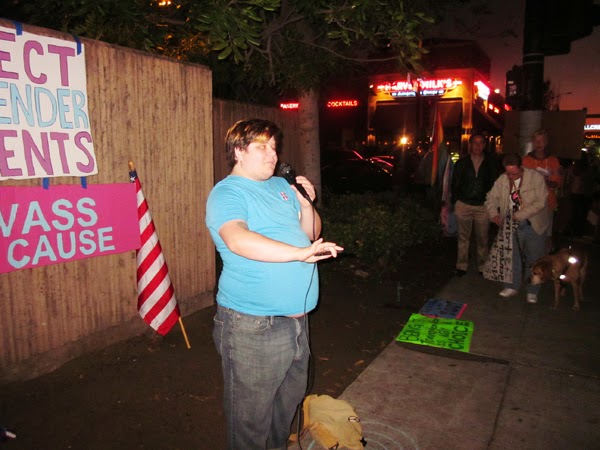 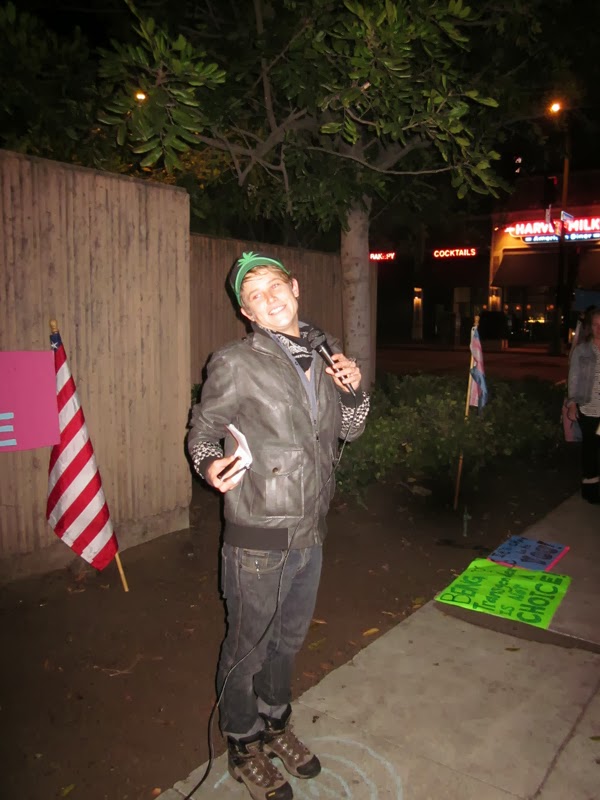 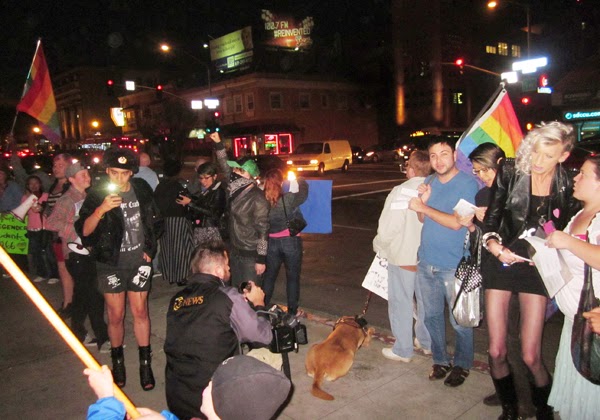 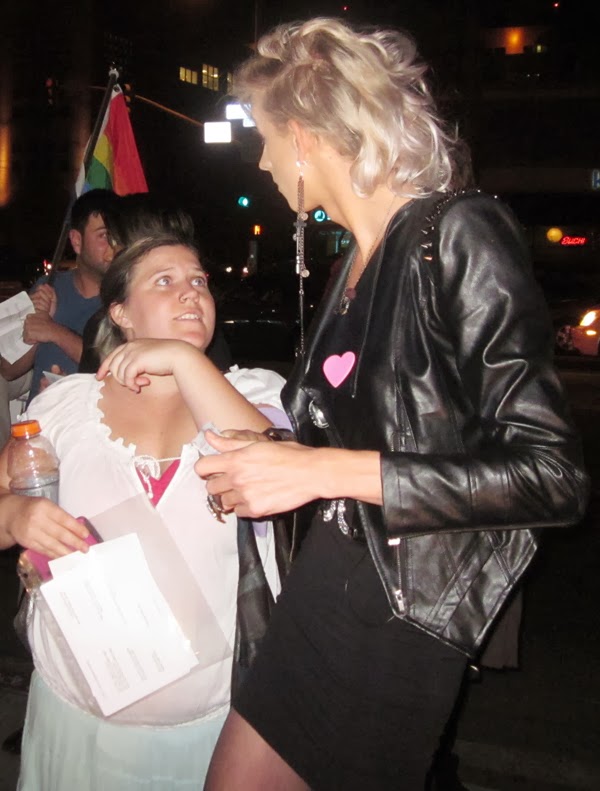 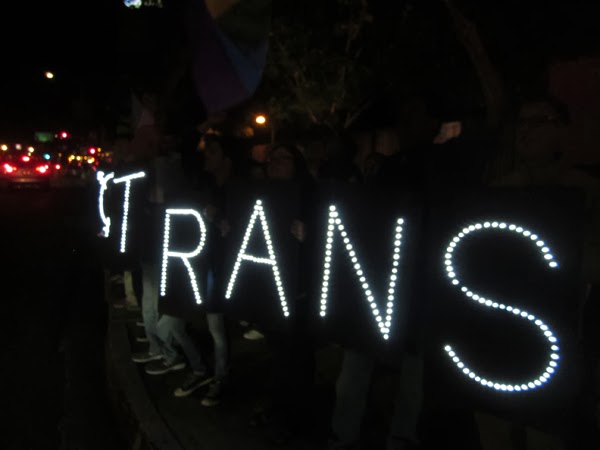 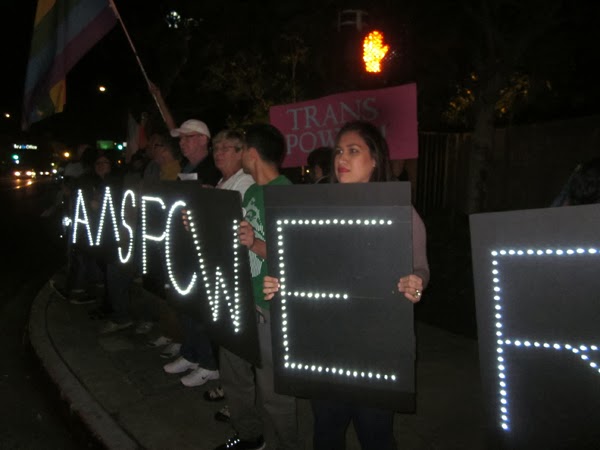 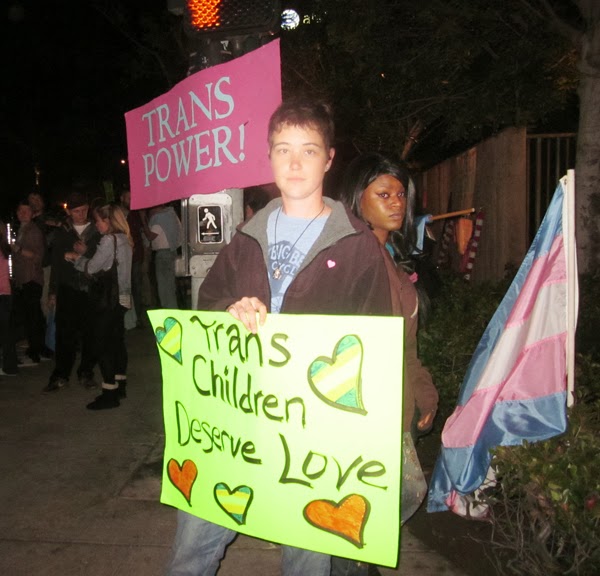 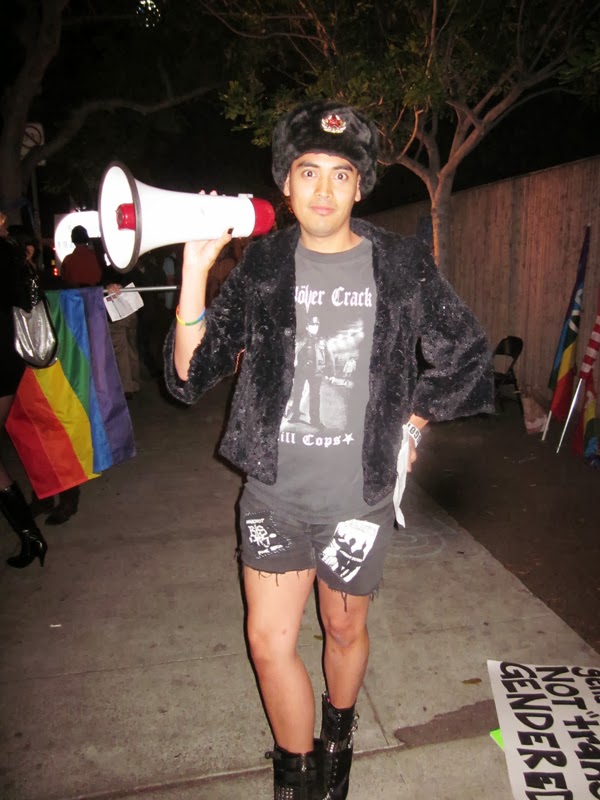 We, SAME Alliance of San Diego County, strongly condemn the International Olympic Committee (IOC)’s decision to hold the 2014 Winter Olympics in Sochi, Russia, at a time when Russia’s government is mounting a massive campaign of repression not only against Lesbian, Gay, Bisexual and Transgender people but against anyone who advocates for their rights or presents them in a positive way. We also condemn the IOC’s decision to hold the 2016 Summer Olympics in Rio de Janeiro, Brazil, when half the world’s reported hate murders of Transgender people occur in Brazil. We call on the IOC never again to hold an Olympics in a country that does not guarantee full equal rights, including marriage equality, for its Lesbian, Gay, Bisexual and Transgender people.

We question the sincerity of Russian President Vladimir Putin’s pledge that no Lesbian, Gay or Bisexual people would be arrested or harassed during the Sochi Olympics. Already there has been at least one report of an Olympic security person harassing and detaining a spectator for holding a rainbow Pride flag. When both the Winter and Summer Olympics were held in Nazi Germany in 1936, Adolf Hitler made a similar pledge with regard to Jewish people participating in or witnessing the Games.

We call on all U.S. corporations involved in sponsoring the Sochi Olympics, including McDonald’s and Coca-Cola, to acknowledge the controversies surrounding the Games and stop advertising the Sochi Olympics as a worldwide celebration of sportsmanship and good will. We call on these companies to publicly oppose and condemn the harsh Russian laws targeting Lesbian, Gay, Bisexual and Transgender people. We urge individuals to consider the unwillingness of such companies to consider the dark side of the Sochi Games when making their personal purchasing decisions.

We call on all Lesbian, Gay, Bisexual and Transgender athletes participating in the Games to make public gestures of support for equal rights similar to those made by Tommie Smith and John Carlos, who publicly protested racial discrimination by raising their fists in the air during medal ceremonies in the 1968 Olympics.

Finally, we call on the IOC to allow Transgender athletes in future Olympics to compete in the gender with which they identify and be given the rights provided to California public school students by the recently passed AB 1266.

SAME Alliance is an open and democratically run grass-roots organization dedicated to Queer liberation and the struggle for social justice through activism, education and support for broader movements.

SAME Alliance Goals and Objectives include:

1) An end to all legal and extra-legal penalties for all sexual expression between consenting adults worldwide.

2) Extension of the 1964 Civil Rights Act to ban all discrimination based on sexual orientation, gender identity or gender expression.

3) Full legal recognition of all marriages and intimate relationships between consenting adults without regard to their biological or self-perceived gender.

4) Comprehensive immigration reform in the U.S., including a path to citizenship for all immigrants and the right of U.S. citizens in relationships with foreign nationals to sponsor their partners for immigration purposes.

5) Full protection for all workers who wish to organize into unions and bargain collectively with their employers, including immediate recognition of any union once it has enrolled a majority of the workers in a workplace or bargaining unit.

More information is available at www.samealliance.com.
Posted by mgconlan at 6:41 PM